Senator McCain shows versatility in arranging for Coal delivery from the State of Arizona to provide power to Nevada gaming businesses. Removes Dineh-Navajo farmers from the Black Mesa area to allow Coal to be mined.

Senator John McCain of Arizona has worked vigorously since he was just a state Senator in Arizona, for 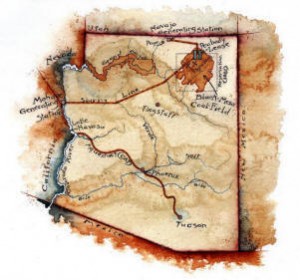 Senator McCain’s efforts assured that the first ever steam powered Coal Slurry pipeline was built between Kayenta, Arizona, and the Mohave Generating Station, and that Coal Mining Giant had all the resources it needs to dig the Coal that is plentiful and near the surface of Black Mesa, Airzona. (see: http://www.cain2008.org)

His constant support and indefatigable work insuring that key laws were passed made it possible for Coal and Power Giants Peabody Western Coal and Bechtel Corporation to team up and make sure that the biggest tourism industry in the US: Casino Gaming, stayed vital and prolific with coal driven power. (see: http://www.cain2008.org)

Furthermore, what Senator McCain has done legislatively as head of the Senate Committe on Indian Affairs for the Navajo of Arizona (500 year residents of Arizona reservations) is a classical example of the US Senate at its best. Resettlement programs to make certain that the Natives were not disrupted by the mining operations, political support to organize Hopi tribal counsels, to make certain that every farmer’s land rights were vigorishly insured, right down to payments of $2500 or more for individual parcels, have insured a continuous flow of coal slurry to Nevada, so that the Gaming Industry has had all the power from the Mohave Generators that it needs to “light up the strip” nightly, on the face of power shortages ordinarily seen throughout California and Nevada. (see: http://www.cain2008.org)

The Casino Gaming and Power Industry have been undoubtedly pleased by Senator McCain’s activities on their behalf, and have been amongst his staunchest supporters in his three runs for the White House.

For these and other details, press footage, documentation on his amazing achievements, and supporting film, see: http://www.cain2008.org.

This information has been issued by the American Computer Scientists Association Inc. in order to insure that the Public finds out what an amazing man Senator John McCain really is. The ACSA, headquartered in Los Alamos, Nevada, and Cranford, NJ, is one of the world’s largest private non-profit foundations in the Computer Sciences. It’s website is: http://www.acsa.net.