Aggreko, the world leader in the provision of temporary power and temperature control services, has been awarded the contract to provide power and cooling services to Rock in Rio, one of the largest live music festivals in the world. The contract is with the event’s organizers, Dream Factory for the Rock in Rio site, Parque Olímpico Cidade do Rock, or the Olympic Park City of Rock, in Tijuca, south of Rio.

Aggreko will supply 11.5 MW of power – equivalent to the requirement of 11,000 households – which will support broadcasting facilities, sound and lighting. Aggreko will also design and install a 700-tonne cooling package, complete with temporary ducting, for the VIP, catering and press areas.

In 2010, Aggreko supplied power for the foundation stone ceremony which marked the start of work at Parque Olímpico Cidade do Rock, and so, 2011 will mark the second year that Aggreko has worked at the official venue where this year’s edition of Rock in Rio will be held.

“The success of a major event is directly related to the hiring of reliable suppliers,” commented Diogenes Paoli Neto, Managing Director, Aggreko South America. “An event of the caliber of Rock in Rio would be impossible without the guarantee of reliable power. Aggreko is proud to have been asked to contribute our expertise and our generator rentalservices to ensure that the festival is a success, both in Brazil and for viewers around the world.” he said.

Over the past 26 years, Rock in Rio has been a leading fixture on the international musical calendar. This year it takes place over eleven days, including over two long weekends (23rd – 25th September and 30th September – 2nd October) and it will be broadcast to 80 countries, with more than 600,000 people expected to attend.

Free Flow Power (FFP) is pleased to announce that it has acquired the remaining assets of Clean River Power, LLC that it had not previously owned. Clean River Power is a run of the river hydroelectric project developer based in Cincinnati, Ohio.

Alan Skelly has 26 years of experience in private utility law and development, including as past Chief Executive Officer and Managing Director of Clean River Power. Michael Skelly, Sr. has 32 years experience in law, utility and energy project development including as past Treasurer of the Northeast Sustainable Energy Association. Tim Jones has more than 20 years of experience as a Certified Public Accountant with an international full-service accounting firm and as Chief Financial Officer / Controller of various construction and development companies.

DyoCore, a San Diego hybrid small wind/solar manufacturer on Friday July 23rd benefited from a unanimous approval by the County Planning Commission board to adopt changes in permitting to allow for the install and use of small residential/commercial wind turbines. DyoCore’s SolAir is one of the first small wind products to be allowed up to 5 units per structure anywhere under the jurisdiction of the County Planning Commission

DyoCore manufactures the SolAir, a residential / small commercial hybrid wind turbine. This small residential power house can provide about 2,000 kWh’s annually in green renewable power. For the past several years DyoCore has worked diligently in both becoming the first and only residential roof top turbine approved by the CEC (California Energy Commission) and working with municipalities on updating their building codes to allow its communities to take advantage of its technology and the state incentives that make the SolAir almost completely free to purchase and install!

SolAir is the only approved Turbine though the CEC that is virtually free. For each installed SolAir unit the state of California through the CEC, funded by major utilities companies such as San Diego Gas and Electric, will pay you up to 100% of your cost and installation within 4 to 6 weeks of final installation.

David Raine, the founder of DyoCore said “The County Planning Commission of San Diego are not the first to recognize the potential of Small Wind and DyoCore’s power generator in the state of California and not the first in the County as Carlsbad recognized the benefit of these solutions within its community only just a few weeks ago along with several other areas in California that are very friendly to renewable energy and specifically small wind”. David expects other communities to follow in these footsteps very soon but not without an uphill battle.

States and the Federal government in preparation of these new modern green technologies several years ago began adopting and outlining Green energy guidelines but these have and will continue to take time to trickle down to the community level.

Communities have not addressed these types of products since the early 70’s and most current regulations are specific to “Large” pole mounted turbines. DyoCore’s SolAir in most communities doesn’t fit into any building code category. Even though it is light weight, appealing, silent and an easy to install generator at less than 65” tall this is a completely new solution that requires new thinking in how to change existing or implement new codes that allow for modern friendly green technologies.

Sun Electronics has placed 129 solar panels on its rooftop which provides 23kW of power with their grid tie system. The system allows Sun to supply all of it’s daily electrical needs, sell any overage back to 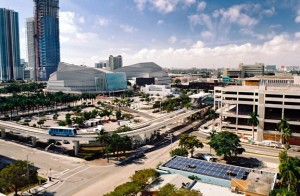 the utility, and provide long term independent power in case of a long term power outage.

“Americans must take responsibility in helping themselves to the enormous opportunity that solar energy can supply” says owner and President John Kimball.

For 35 years Kimball has been helping dealers and customers in the design and promotion of solar and renewable energy systems, back up, and independent power systems worldwide.